Bees are very important to Slovenians. In the last decade, the number of registered beekeepers has increased from around 8,000 to more than 12,000 in 2020. The front sides of Slovenian beehives are by tradition painted in colours, showing sceenes of daily life or stories. 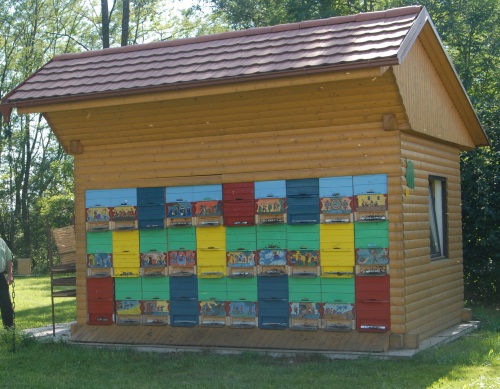 The first beekeeping teacher in the Habsburg Empire (German: Habsburgermonarchie) was of Slovenian origin: Anton Janša (1734—1773). He was a pioneer of modern apiculture in Central Europe. When the Empress  Maria  Theresia  founded  the  beekeeping  school (Oekonomie-Gesellschaft) in  Augarten (Wienna) in  1769, she soon appointed Anton Janša as the first teacher of apiculture. He learnt the art of beekeeping from his ancestors, as Carniola was known by good yield of honey and special Carniolan bees, the meekest animals among bees. His natural intelligence made him a good zoologist and an expert, whose knowledge the Empress ordered to share after his death in all schools of the empire. His methods and hives are still used today all over the world. Since 2018, his birth day, 20 of May is celebrated globally as a World Bee Day.

Anton Janša was a simple young man from Carniola  who  attended  the  school  for  copper  engraving  and  painting  in  Vienna. Anton Janša originated from  Upper  Carniola  in  Slovenia,  from  the  environment  where  beekeeping  was  very  developed, advanced, and also profitable. Prof Dr Šalehar noticed that Janša’s beekeeping method was based on the knowledge of Upper Carniolan  beekeepers. Janša lectured that the bees must not be killed, he advocated moving hives to bee pastures, he rejected the belief that  the  drones  are  water  carriers  and  lectured  that  a  queen  bee  is  inseminated  by  the  drones  in mid-air, the fact that the old Upper Carniolan beekeepers were the first in the world to discover. He wrote  two  books  on  beekeeping  in  German  language: Abhandlung vom Schwärmen der Bienen (in Wien 1771, reprinted: Wien, 1774; Grätz, 1775; Berlin, 1927) and  Des Anton Janscha … hinterlassene vollständige Lehre von der Bienenzucht (Wien, 1775; Prag, 1777; Prag, 1789 [?]; Wien, 1790, etc., issued after his death).

Partial pedigree of the Janša family has been known from several authors. Dr Ksenija Rozman first completed the family history. Anton originates on the father’s and mother’s side from solid Slovene farmhouses. Already his father had over one hundred bee hives himself. By tradition, neighbouring farmers would gather at the village and discuss farming and bee-keeping. In 1769, Anton began to work full-time as a bee-keeper at the Habsburg court in Vienna and a year later became the first royally appointed teacher of apiculture for all Austrian lands. Anton Janša is known as a pioneer of modern apiculture and a great expert in the field. He was educated as a painter, just like two other brothers: Valentin and Lovro, who were both painters in Vienna, Lovro even a professor at Painting Academy in Vienna.

The genealogy data are gathered from the registers of the Radovljica parish, which included the villages of origin of Anton Janša ancestors:

– Hraše, where Anton’s grandfather Andrej had the double-farm homestead (Grundbesitzer) and where the Anton’s father Matija was born;

– Breznica, where Anton’s father Matija moved to and made his home and where Anton was also born;

– Dvorska vas, where mother Lucija Debelak was born as a landowner’s daughter and where the eldest beekeeper’s sister Neža was born.

As parents both originated from well situated agricultural families, they could buy their own land, built a house with barns and lived also out of selling honey and other apiculture products. This was quite an advantage, as in this period of feudalism a majority of farmers were still not owners of the land, but peasants working on the landlord’s land and may not freely move anywhere.

When in 1752 the father Matija died, his eldest son Anton (18 years old) took care over his beehives and helped his mother in raising the family. They kept painting in the barn, until Anton Janša and his brother Lorenz went to Vienna in 1766. Anton brought with him 16 hives with Carniolan bees, which served as initial population for later dissemination all over Austria and Hungary.

We can help you answer the question and make first steps in your journey ‘Trough your DNA testing to your Slovenian roots’.

Tracing back your pedigree by documents available in archives can lead you to the original families, which lived centuries ago. Simple testing of DNA can unlock the secret of your origin for thousands of years ago.